We at HighClap present a list of hit Shah Rukh Khan songs with lyrics. We also have some really interesting trivia about the star which is sure going to leave you mesmerized. 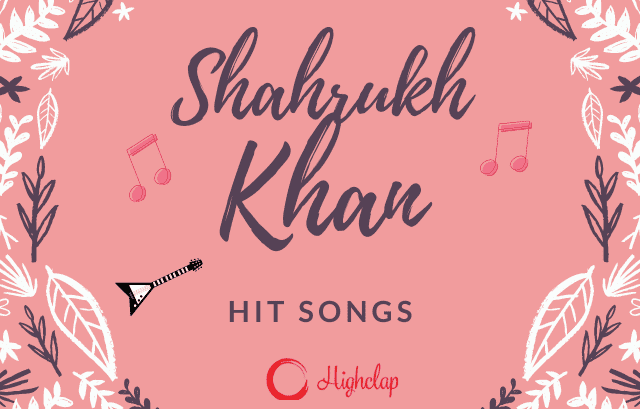 Yes, we are talking about Bollywood superstar Shah Rukh Khan (शाहरुख़ ख़ान), also commonly known as SRK. He is ruling the Indian cinema like no one ever could. With 80 Hindi films under his name, he is one of the influential Indian and also one of the most successful and richest actors in the world.

He is recipient of 14 Filmfare Awards and Padma Shri. In addition, the Government of France has awarded him the Ordre des Arts et des Lettres and the Legion of Honour.

He started his career as a TV actor and later on got the first break in the movie Deewana, in 1992.

After playing a number of villainous roles in starting of his career, he rose to fame with romantic genre movies like Dilwale Dulhania Le Jayenge, Dil To Pagal Hai, Kuch Kuch Hota Hai, Mohabbatein and Kabhi Khushi Kabhie Gham, etc.

We have put together a list of popular Shah Rukh Khan songs, with lyrics. These songs are from the biggest hit movies of his career and extremely popular among fans across the globe.

15+ Most Famous Christmas Carol Songs Of All Time